Sun, Sand, and a Side of History: 7 Historic Sites You Must Visit in the Caribbean

If you love sun and sand… with a side of history, here are seven Caribbean islands whose history lives on today through preserved and protected UNESCO World Heritage historic sites.

Which history-rich destinations top your list for an upcoming beach holiday with a twist?

Known for its famous inhabitant, British Admiral Lord Nelson, who lived in Antigua’s Royal Navy Dockyard for three years in the 1780’s, Nelson’s Dockyard is part of a National Park UNESCO site that is comprised of Georgian naval buildings and a walled enclosure. (Pictured, top, courtesy Antigua and Barbuda Tourism Authority)
Historically, for Britain’s Royal Navy far from home in the West Indies, Antigua’s coast and English Harbour were a perfect bolt hole from enemies and the elements. Deep, narrow bays protected by mountains provided an ideal location to repair ships and regroup safe from hurricanes. 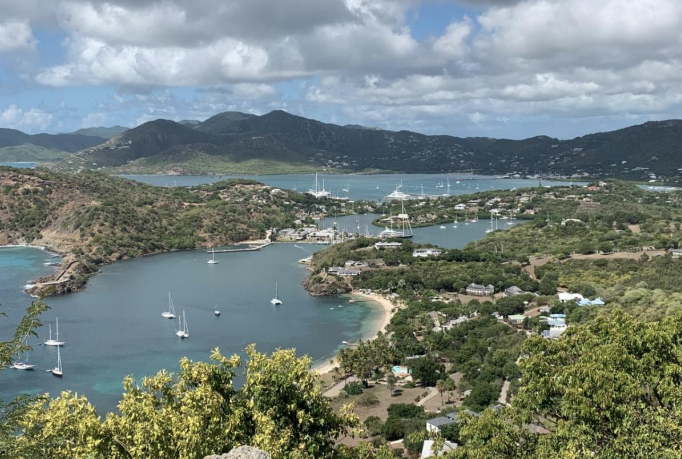 BARBADOS: Historic Bridgetown and its Garrison

The distinction of biggest British colonial garrison in the 17- and 1800’s belonged to Barbados. Combined with the capital of Barbados, Bridgetown, one of the finest remaining examples of British colonial settlements of the period, it’s a UNESCO site.
Bridgetown’s name comes from the bridge constructed in the area by earlier Amerindian inhabitants, before being settled by the British beginning in the 1600’s. Other Dutch and Spanish settlements were laid out in a grid, but Bridgetown follows a ‘serpentine’ city layout. Bridgetown’s harbor was a key maritime hub and frequent first port of call for ships arriving from a trans-Atlantic crossing. 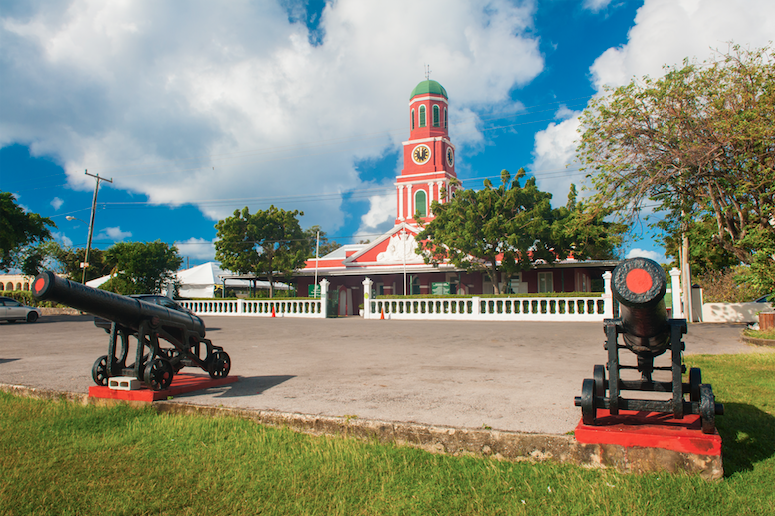 The Barbados Garrison began at the turn of the 1700’s with construction of a fort, barracks, parade ground and other supporting buildings, including its famous red towered guardhouse. It protected the island from attacks by competing colonial powers like Spain, Holland and France.
Bridgetown and its Garrison are still central to life on Barbados. Cruises call at Bridgetown’s port, and some lines embark on Caribbean itineraries from Bridgetown, which has a host of land and sea-based activities for visitors.

CURACAO: Historic Willemstad and its Harbor

Willemstad (in English: William Town) is the modern-day capital of the Dutch island Curacao. Until 2010, it was also the capital of what had been the Netherlands / Dutch Antilles, which included the ‘ABC’ islands of Aruba, Bonaire and Curacao, as well as the ‘SSS’ islands of Dutch St. Maarten, Saba, and Sint Eustatius. 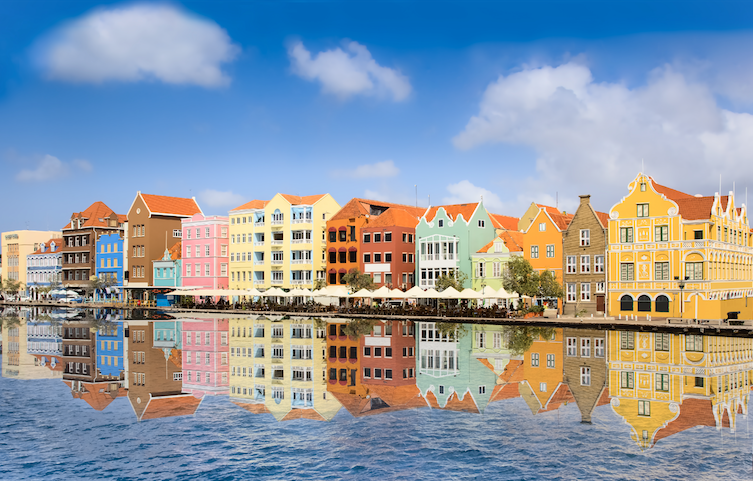 Its candy-colored, unmistakable harborfront skyline combines Dutch with Spanish and Portuguese architectural styles of the 1600’s. It’s one of the most distinctive and best-preserved historic cities in the Caribbean. Willemstad is home to the oldest surviving synagogue in the New World.
Today, Curacao, in the southern Caribbean, is a must-see destination for travelers who have already immersed themselves in the more abundant examples of British and Spanish Caribbean history. The ABC islands are famous for their dry, desert climates, and world-class diving, as well as iconic examples of 400-year-old Dutch history.

The capital of the Dominican Republic was the first seat of Spanish colonial rule in the Americas. This ‘cradle’ of the New World was founded in 1496 soon after the arrival of Christopher Columbus. It’s the oldest, continuously inhabited European settlement in the Americas. 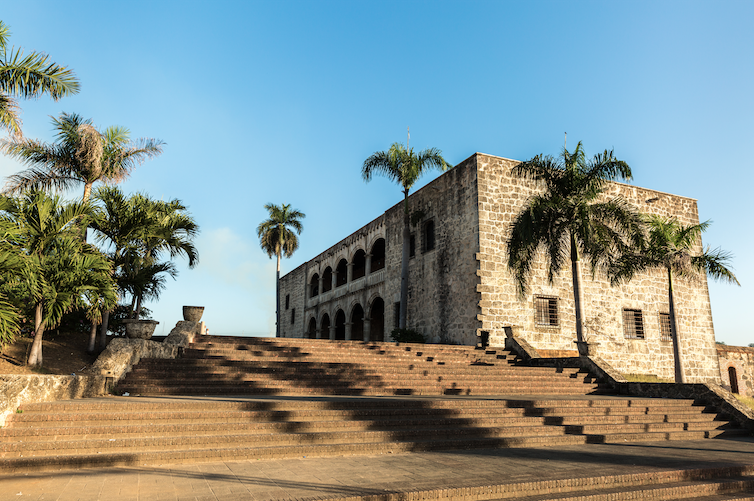 Santo Domingo’s Colonial City is much more than a single building, which is sometimes all that remains of historic settlements. It’s home to the first cathedral, first hospital, first customs house, first fortress, first monastery, first castle, and first university in the Americas. In addition to the historic landmarks, Santo Domingo’s early form of urban planning created a city laid out in a grid pattern, establishing the model that would be used throughout Latin America as Spanish and Portuguese influence spread.
Although most famous as an all-inclusive beach resort vacation destination, and many visitors to the Dominican Republic stay in their beach resort communities, expanding your visit to Santo Domingo’s UNESCO World Heritage Colonial City is an eye-opening, intriguing insight into the entire region’s history.

The mountains that cover a fifth of the island are Jamaica’s first UNESCO World Heritage Site, and also the Caribbean's first World Heritage Mixed Site for both natural and cultural riches.
In addition to being a global biodiversity ‘hotspot’ with 1357 flowering plants, a quarter of which are only found in Jamaica, and 87 that can only be found in the park, the steep slopes of the rare, ‘tropical mountain’ environment are the only known home for rare butterflies, birds, boa and other creatures. 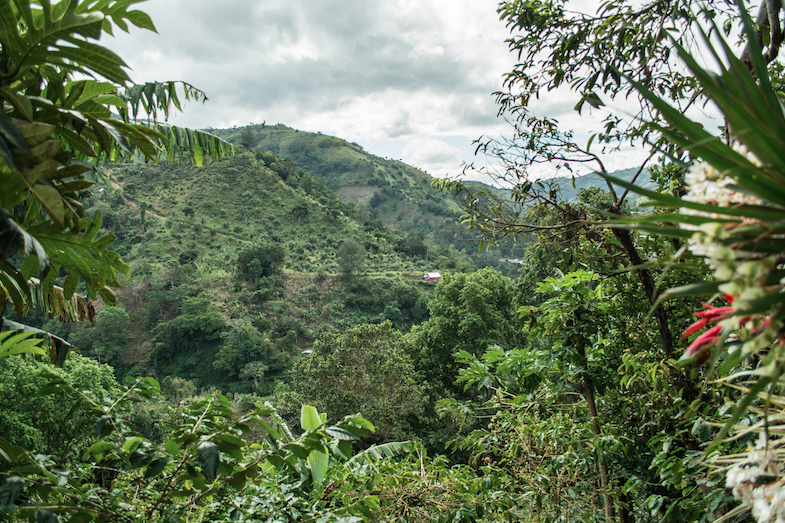 History lives here, too. This is where indigenous Tainos and former enslaved persons fled to escape colonial power. The thickly forested mountains provided the isolation and natural resources for the Maroons' survival and fight for freedom. They developed a profound knowledge of and spiritual connection to the mountains, creating a cultural legacy that survives in modern Jamaica.
Tangible history of the Maroons' life and resistance in the mountains also remains today. The Nanny Town Heritage Route includes settlements, trails, viewpoints, and hiding places.
The Blue and John Crow Mountains sustained Maroons and hid them as they struggled to survive and achieve recognition and liberation. Their struggle and successes influenced other slave resistance in the region, and is a powerful story of humanity for all people of the world.

If you’ve ever been on a cruise ship arriving into port in San Juan at sunrise, you’ll have seen one of the most beautiful approaches by sea in the Islands. San Juan’s fortified harbor projects on rocky shores out into the sea, with emerald greenery setting off the stones and the waves. 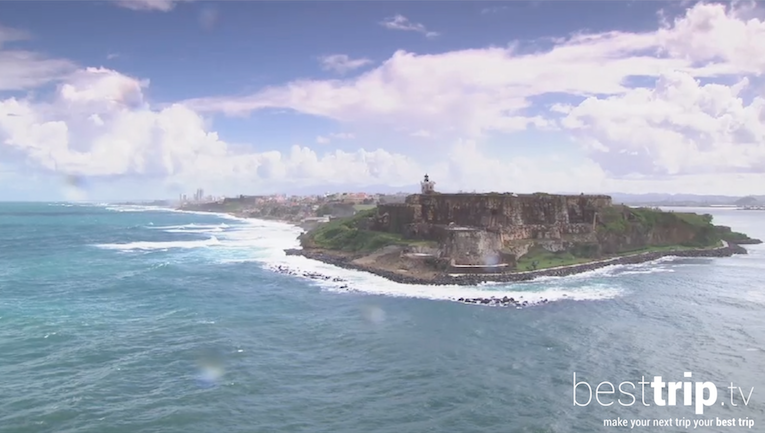 The series of defensive structures that are now a UNESCO World Heritage site on this U.S. territory were built beginning in the 1500’s, and one quick look at a map will tell you why. Puerto Rico occupies a very strategic position in the Caribbean Sea, and this fortified harbor stood guard over the bay and city.
The U.S. National Park Service manages the Old San Juan site that includes a citadel, Castillo San Felipe del Morro, built from the 15- 1700’s and named after Spanish King Philip II, as well as bastions, powder houses, and almost all of the impressive old city wall.
La Fortaleza or El Palacio de Santa Catalina, is the name given to the vivid, wedding-cake style governor’s mansion in Old San Juan. Built in 1533, it has been the official governor’s residence for centuries and is the oldest executive mansion in continuous use in the New World.

The UNESCO World Heritage historic site in the twin-island country is the fortress – one of the best preserved historical fortifications in the New World - perched on the steep slopes of St. Kitts’ Brimstone Hill. Like Nelson’s Dockyard in Antigua, and Bridgetown, Barbados’ historic core and garrison, Brimstone Hill’s fort is a British military construction. It was built in the 17th and 18th centuries by enslaved Africans.
But the historic site everyone’s talking about these days is on next-door Nevis, where a stone house originally built in the late 1600’s merges Nevisian and American history. The recent, wild success of the Broadway musical Hamilton has shone a spotlight on the Nevisian birthplace of American Founding Father Alexander Hamilton, who, among many accomplishments during a pivotal time in history, was instrumental in having the international slave trade made illegal. 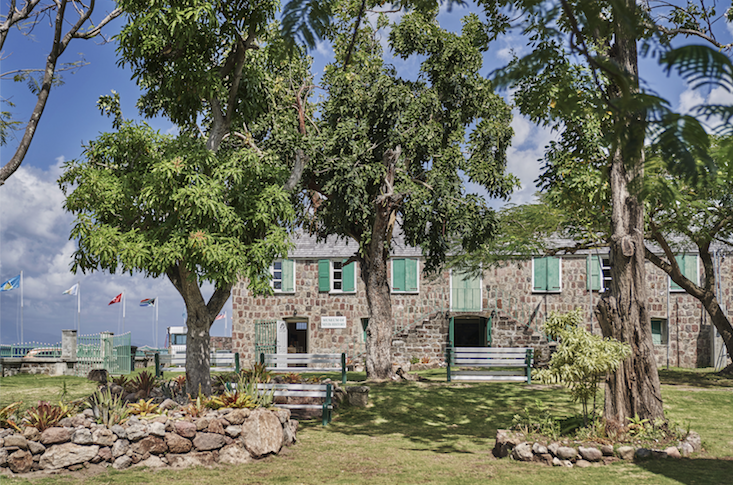 (Image courtesy Four Seasons Nevis)
In the heart of Nevis’ small main town of Charlestown, Hamilton House and other historic buildings are still very much part of local life. The first floor is a museum, and the second floor is the meeting room for the island’s House of assembly.
The landmark resort on the island, the Four Seasons Resort Nevis, has even created a special Hamilton experience to bring his legacy to life for guests, involving a visit with a local storyteller, on-resort experiences and even a Hamilton-inspired playlist.

By: Lynn Elmhirst, Producer/ Host, BestTrip TV
All rights reserved. You are welcome to share this material from this page, but it may not be published, broadcast, rewritten or redistributed.

5 Stars and Social Consciousness; A Paris Hotel Creates the Future of Luxury Cuisine

Celebrating World Cocktail Day with a Travel-Inspired Cocktail... or Two