About Galapagos Islands Escorted or Guided Tour
The Galapagos Marine Reserve is one of the largest and most biologically diverse marine protected areas in the world. It covers 133,000 square kilometers (51,352 square miles), surrounding the Galapagos Islands in the eastern Pacific Ocean, about 1,000 kilometers (600 miles) off Ecuador’s coast.
The strategic location of the islands on the confluence of several marine currents generates a mix of cold and hot water which have allowed the arrival and establishment of species that come from different areas of the Pacific ocean. This makes the reserve an important marine life sanctuary.
Unique wildlife
The presence of the marine mounts and nutrient blooms caused by the Cromwell submarine current generate an unbelievable abundance of plankton that sustains sea birds, sea lions, and other species as whales, sharks and sea turtles that are difficult to observe in other parts of the world. The reserve includes some famous places to dive where you can observe big groups of hammerhead shark, giant whale shark and manta rays, coral reefs, and colorful fishes. 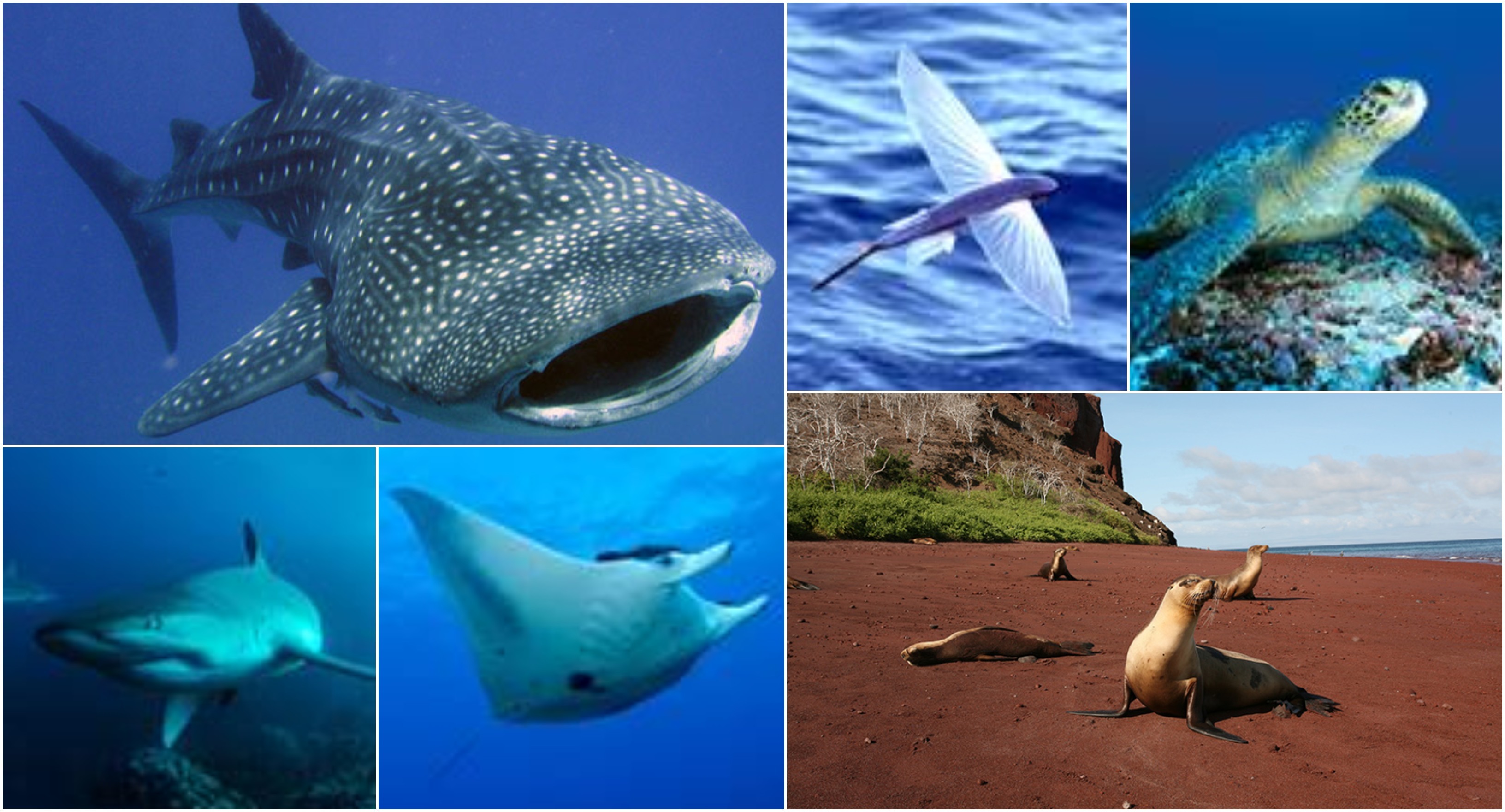 Coastal lakes, moist soil, and areas where freshwater and seawater mix contain unique species still to be studied. Cold, hot and warm marine currents come together here, generating a wide diversity of animal life: from small colored fish to large mammals; marine iguanas, Galapagos Land Iguana, Galapagos crabs, Blue-footed boobie, swallow-tailed gulls, ducks, frigatebirds, and the Galapagos tortoise. The most unique species to the Galápagos is the Marine Iguana, due to its amphibious nature. It is the only known reptilian lizard that can forage in water and on land.
How to get in?
As with the Galapagos National Park, entry to the Galapagos Marine Reserve is through the Baltra and Cristobal airports. Near to populated harbors, there are beaches, bays, lagoons, and islets that can be easily visited, either on your own or by hiring the services of local operators authorized by the National Park Directorate.
What to do?
In certain areas in the Galapagos Marine Reserve, it is possible for visitors to dive or snorkel, and many guests have come into contact with marvelous aquatic species that live underwater. Other habitats within the Marine Reserve are the rocky seabed, vertical rock faces, sandy beaches, mangrove swamps and, to a lesser extent, coral reefs. A popular spot is Tortuga Bay on the Island of Santa Cruz where there is a separate mangrove where there are always white tip reef sharks.

The Whale Shark Whisperer of Cabo

Discover the Mystical 'Blue Holes' of The Bahamas

Moonlit Canopy is a unique geodesic dome accommodation experience set among the oaks, just south of Pelican Lake in Manitoba.

KLM has revealed the future of flight. Hint: You'll be sitting IN the wings.